Over 50 Celebrities Flaunting Their Bikini Bodies

Many women are rocking their bikinis over the age of 50 some into their 60’s. They have held onto their bikini bodies proving that age is just a number.

Women’s bodies are forever evolving, many years ago, it was said that a women should not wear a bikini past 30, and then it was 40 now thankfully the age limit is gone forever.

Let’s take a look at some celebrities that are rocking their bikinis past 50.

Sharon was born March 10th 1958 making her 60 years old this year. This stunner still sports a bikini body. Her secret, she eats well and applies a exercise regime that is always changing focusing on areas that need a little extra. Whatever she is doing, it works.

Elle was born on March 29th in 1964 making her a beautiful age of 54. She has no problem  competing with the younger generation when it comes to her bikini body. Between sipping on sipping on healthy green smoothies, morning meditation sessions and daily yoga classes, Elle has kept her famous bikini body in check.

Halle was born on August 14th 1966. The 51 year old bikini babe looks simply irristable in her bikini flaunting her everlasting curves. Halle has always had the perfect blend of elegance and beauty that has been adored for years.  Halle works out five times a week, alternating between boxing, yoga, cardio and weights. Nutrition plays an important role as well, as the 51-year-old sticks to a Ketogenic diet supplemented by super foods. 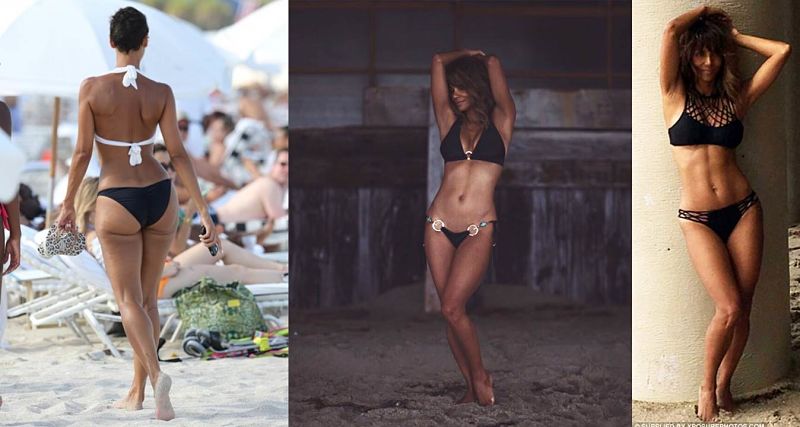 Christie was born on February 2nd 1954 making her 64 years old. At the time of this photo, she was aged 61 and 63 still looking fabulous. She has the curves of a 20 year old and the smile to match. Christie keeps her breathtaking figure by eating right, “She is a vegetarian” and using her Total Gym. It seems Christie has completely dodged the aged laws and stayed as stunning as ever.  It should also be noted that Christie made an amazing appearance in the 2017 SI Issue at age 63.

Born on January 11th 1964 the 54 year old is shocking the world with her amazing body time and time again in her bikinis. Her figure is slim and trim and easily joins the over 50 bikini club. Yolanda tale carte of herself by living a healthy life style including essential oils, eating organic, drinking green juice, swimming and salt baths.

Since the show aired “Keeping Up With The Kardashians” there has been a draw to the Jenner’s. Maybe it is because of Mom Kris. Take a look at her body at age 62 born on November 5th 1955, she is rocking her bikini body and show she should.

We recently did a post on Elizabeth Hurly but she is definitely in the over 50 bikini club. Born on June 10th 1965 the 52 year old bikini babe is a shoe in for sure. Her definition is amazing, perfect balance. What can we say other than “perfect”

Hers one for, Susan Lucci, born December 23 1946…Yes you read it right 1946, Susan is 71 years and looking fabulous in her swimwear. How is this possible, she looks phenomenal. Susan is makes 71 look like 40 by having a varied exercise routine, eating right and most important, she wants to look as young as she feels. Well whatever you’re secret is Susan. Its working.

Salma Hayek was born on Sept. 26th 1966 making her 51 years old when these pics were taken. Really, can this be a thing, well take our word for it She is in fact 51 and these are her untouched bikini pics. WOW!

Of course we cannot forget the stunning Cindy Crawford who at the age of 52, born on February 20th 1966 is rocking her curves and showing off her amazing body in a host of bikinis.

Born June 15th 1964, in her 50’s Courteney is looking sensational. Her well toned body looks great in this black string bikini. Another example of what eating healthy and exercise can do for a women’s figure.

We think it is amazing what women are achieving into their later years. Who says bikinis should not be worn after age 30, 40, 50, 60 and in this case even 70. Say yes to the bikini